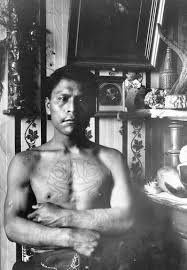 The Leader Post delves into the age-old practice of tattooing by the Haida peoples:

…the Haida practiced tattooing for generations before European contact.
“The tattoo marks themselves were indicative of status, spiritual devotion and decoration,” the centre explains on its website.
Individuals expressed their part in a social unit, a moiety, or a lineage through body art and adornment. In this sense, tattoos put a person’s identity and spiritual connections on display through the use of crest figures and/or guardian spirits.
The designs used for tattooing were usually acquired through heredity, and crests of the bearer were dependent on their lineage. END_OF_DOCUMENT_TOKEN_TO_BE_REPLACED

Posted by Jordan Carlton Schaul of University of Alaska on January 11, 2014

The distinguished ecologist has agreed to answer my questions about indigenous knowledge and the impact of such informational resources on the management of wildlife populations.

Jordan: In many cases, the large scale hunting of megafauna by indigenous peoples has been implicated in mass extinctions in the late Pleistocene. Is it fair to attribute the demise of some large placental and marsupial mammals to indigenous peoples?

Michael: This is an interesting question.  It is difficult to say, as what happened in prehistory must be pieced together through sketchy evidence. However, I am highly skeptical of the claims of some scientists, such as Paul Martin (Martin, P.S. 2005.Twilight of the Mammoths: Ice Age Extinctions and the Rewilding of America. Berkeley: University of California Press), who has blamed indigenous people for widespread Pleistocene extinctions.

Martin developed his theory of Pleistocene overkill, also known as the “blitzkrieg model” based on his observation that the sudden demise of large Ice Age mammal populations coincided with the arrival of humans on different continents. Martin hypothesized that as humans migrated from Africa and Eurasia to Australia, the Americas, and the Pacific islands, they rapidly hunted large animals to extinction.  But, as we all know, correlation does not imply causation. END_OF_DOCUMENT_TOKEN_TO_BE_REPLACED

That’s the conclusion of more than 50 researchers at Dartmouth and elsewhere in a special issue of the journal Climatic Change. It is the first time a peer-reviewed journal has focused exclusively on climate change’s impacts on U.S. tribes and how they are responding to the changing environments. Dartmouth also will host an Indigenous Peoples Climate Change Working Group meeting Nov. 4- 5. END_OF_DOCUMENT_TOKEN_TO_BE_REPLACED

Indigenous peoples and local communities are holders of a substantial part of this knowledge and are demanding that it be protected against misappropriation but also against its use without their consent.

The IGC is working on the protection of genetic resources (GR), traditional knowledge (TK), and traditional cultural expressions (TCEs or folklore) against misappropriation mainly by commercial interests. Other concerns include knowledge that has been claimed for collection purposes, or research, or has been used for a long time and is considered part of the public domain. END_OF_DOCUMENT_TOKEN_TO_BE_REPLACED

GENEVA – Indigenous Peoples’ traditional knowledge (TK) and traditional cultural expressions (TCEs) embody significant innovation and creativity and contribute to the diversity and richness of the planet’s civilizations and cultures. They also contribute to the cultural identity, sustainable development and social cohesion of Indigenous Peoples and local communities, and, globally, to the conservation of the environment, the promotion of food security and the advancement of public health.

The enhanced promotion, preservation and protection of TK and TCEs are called for by Indigenous Peoples and local communities, who seek greater control over if and how their TK and TCEs are accessed and used outside the traditional context. END_OF_DOCUMENT_TOKEN_TO_BE_REPLACED

Persevering over eight years, the Kichwa indigenous community of Sarayaku took their claims to the human rights system of the Organization of American States. In July of 2012, the Inter-American Court came down on the side of the community. The Court declared the Ecuadorian government guilty of perpetrating rights violations, having tried to force the entry of a foreign oil company against the community’s will.

You can follow the community’s inspirational journey in Children of the Jaguar, an award-winning documentary co-produced by Sarayaku and Amnesty International. In addition to their successful legal battle, the community has employed many other savvy strategies to maintain the integrity of their ancestral territory. The documentary demonstrates all of this artfully, alongside key aspects of Kichwa culture.

The Global Community of Academics, Practitioners, and Activists – led by Dr. Oleg Komlik